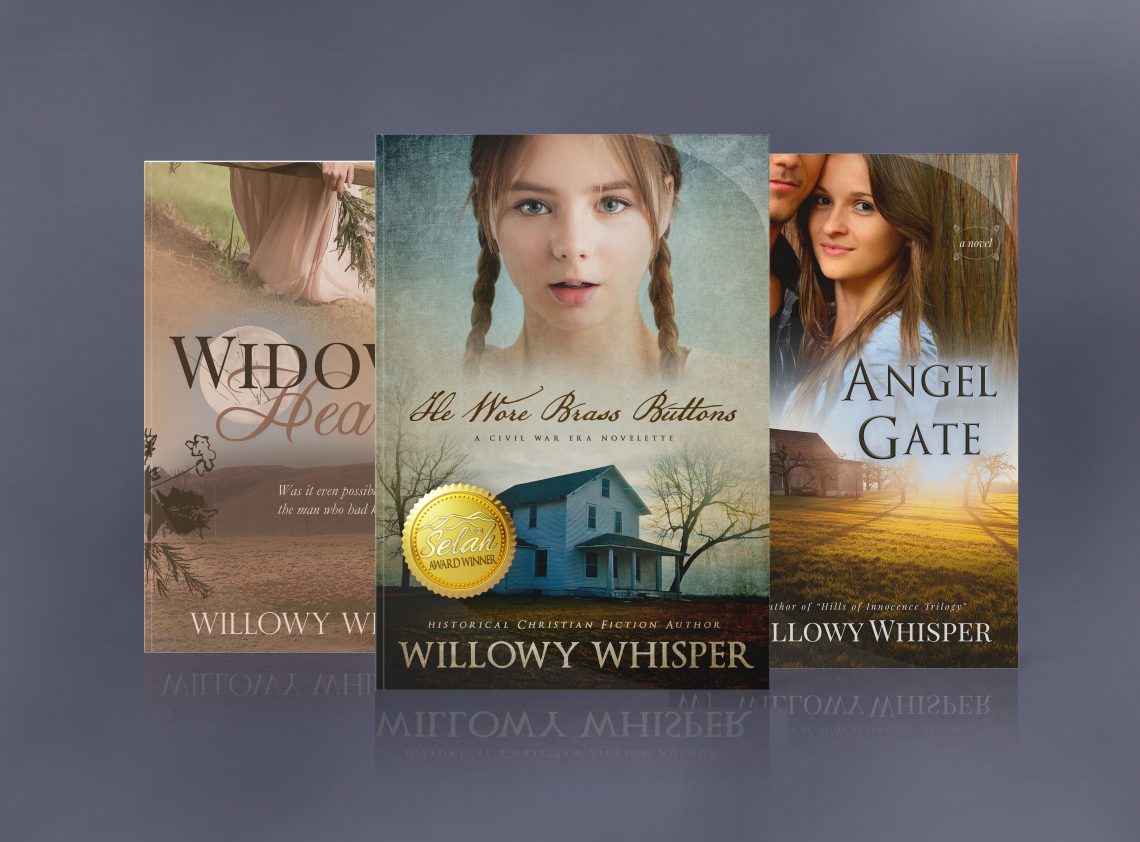 All of Hannah’s books not set in the Regency Era are written under her pen name, Willowy Whisper.

A broken nation, a lonely orphan, and a boarding house of dangerous secrets…

Ever since the letter had come, Linney had imaged Aunt Eba’s face—the same eager smile as her father’s, the same happy laugh, the same kind eyes.

But when she arrives from the orphanage to her aunt’s boarding house, the last of her hope crashes into reality: Aunt Eba doesn’t want her. No one does. No one ever will. And all the blame lies in every last blue belly who took her father’s life.

Then something changes. A locked door upstairs, strange noises, a hand wrapped in chains—until Linney is forced into the kind of nightmare she never imagined.

Would the penalty for his questions—and his love—be lethal?

He’s got it all—looks, charisma, the compelling grin—everything Hollywood could ever ask for. Cass Remmlone is finally living his dreams. Maybe he’s not like he used to be. Maybe he doesn’t call home anymore, doesn’t read his Bible, doesn’t darken the doors of a church. But he’s having fun—and he’s having it with his best friend, Eddie Barlow.

Cass should have known God wouldn’t shut His eyes forever. Chastisement slams so fast Cass hardly knows what’s happening. Eddie is lying on the pavement, paramedics hunkering over him, even as his face goes slack. He whispers one name: Madeline.

Drowning in the horrors of his grief, Cass climbs into his convertible and drives away, leaving behind a career he spent most of his life pursuing. With nothing more than a letter and a name to go on, Cass finds himself in a town called Angel Gate, West Virginia, where he hopes to uncover more about the woman named Madeline. It is mere providence that leads him to the rundown farm, where he catches his first sight of Audrey Wade. If he thought she was beautiful before, the fact that she wants nothing to do with him only increases his attraction. But are his efforts even fruitful? Or is he wasting his time?

The longer he spends in Angel Gate, the more he begins to sense something sinister. A child is in danger, yet no one seems to notice. And who is Madeline? Why does the town go hush at the sound of her name? The closer he comes to the answers, the deeper he sinks into a nightmare.

Cass Remmlone can star in a movie…but can he rescue a child, win Audrey’s heart, and uncover a grisly truth? Or will he die trying?

Gabe Anderson didn’t come to San Belfry to kill. He didn’t even know he’d left a widow until it was too late. But it wasn’t his fault. He had done the only thing he could do, because he had to find those men. He had to uncover their masks. He couldn’t let his brother’s killers go unpunished.

Essie Kincaid didn’t even see it coming. She didn’t know the truth until it was too late, until her husband was dead. Now she’s faced with the wrath of an entire town. She’s an outcast for the second time, and as her world sinks deeper into an abyss of madness, she must fight for the only thing she has left . . . her life.

As the two are thrown together in a devastating plight, it doesn’t make sense for them to fall in love. Too much has happened. Too much lingers between them. Yet as their bruised souls begin to mend together, other forces are already forming to keep them apart. Does their last hope of happiness even stand a chance?

One accident. One man. One dance.

She’d never noticed Levi Grant. Not really. Everyone knew about him, though. Everyone remembered the accident, the tragedy. It was hard to forget. Especially since he had no arm.

She only said yes because of her soft-heart-syndrome. He’d never asked anyone to the dance. Never even had a girlfriend. How could she say no?

But as she’s thrust into a whirlwind of misunderstandings and danger . . . the whole world seems to change. Will her heart change with it?

Please don’t leave me, Jacob. I need you. I know you’re grieving. Maybe we all are. But you’re chasing something you’ll never catch . . . and we both know you won’t come back alive.

When an Indian massacre destroys the settlement they spent a lifetime building, Jacob and Annie cling to the last hope they have left . . . each other. Smoke lingers in the air, the ground reeks of blood, and the twenty-one graves make disfigured lumps in the earth.

Then the unthinkable happens.

Jacob follows a call of God that leaves his wife alone . . . and threatens his life. Will he survive what awaits him on the mountain of savages? And will Annie have the strength to wait for him, even if he never returns? Or have all their dreams already vanished, like sawdust in the wind?

An 1800s missionary novella about one man’s courage to seek the lost.

Would anyone ever believe him? Or was he destined to hang for a crime he didn’t commit?

Harvey West is given one month to prove his innocence. As the evidence points him to the gallows, he strives to find the enemy of the beautiful Elsie Roselind.

Abigail Roselind only knows one thing. Her sister is dead—and whoever killed her will face justice. As her father and the sheriff show mercy toward the handsome stranger, she fights against grief and hatred. How can they not see he’s guilty? What’s to stop him from escaping town the moment their backs are turned?

As the truth finally rears its wicked head, Harvey and Abigail find they are both wrong—but is it too late to do anything about it? Will they be swallowed in the menacing plan, along with Elsie, or will love and justice heal them both?

First it was just a letter, maybe a joke, a coincidence. Now it was more than that. Now it was a living nightmare, threatening everyone he loved, pulling his greatest fear into a reality . . .

As the letters keep coming, Brock Sumner watches his world shatter at his feet. Building a wall around his heart seems like the only answer. Is there any other way to protect the woman he loves?

A drunk with no incentive to change. A runaway with a price on his back. A young child afraid in the dark . . .

Will the letters, perhaps, pull their lives together? Or will the killer find a way to destroy them all?

Fawn Wendell has no choice but to flee. Her life depends on it. She has no where to go, but that doesn’t matter. She has to disappear. She has to get lost, never to be found again, before her pursuer attacks.

Adam Preston loves his children. They’re all he has left. But with the ranch to run, is there any way he can give them what they need, especially when he’s hurting himself?

Jake Sumner returns to an old house, a place that arouses too many memories. If he decides to stay, he may have trouble on his hands . . . trouble a whole lot bigger than him.

Sadie is an injured, silent bird, locked in a cage she can’t free herself from. Her nightmares are real. The fear kills her voice. Will she ever fly again?